EEO Group S.A participated in the conference “National Action Plan for the Validation of Non-Formal and Informal Learning in Cyprus: Presentation and Consultation”

Dr. Angelos Koutsomichalis, Scientific Director of EEO Group S.A, participated in the conference “National Action Plan for the Validation of Non-Formal and Informal Learning in Cyprus: Presentation and Consultation” on 17th of May hosted by the European and International Affairs office of Ministry of Education and Culture in Cyprus.

The Conference was implemented within the framework of the project "Establishment of mechanisms for the validation of non-formal and informal learning" and is co-funded by the European Social Fund. Through this project an effort is being made to modernize the services offered to the citizens, as well as the satisfaction of modern social needs that require the validation of the learning that has been acquired in various contexts. 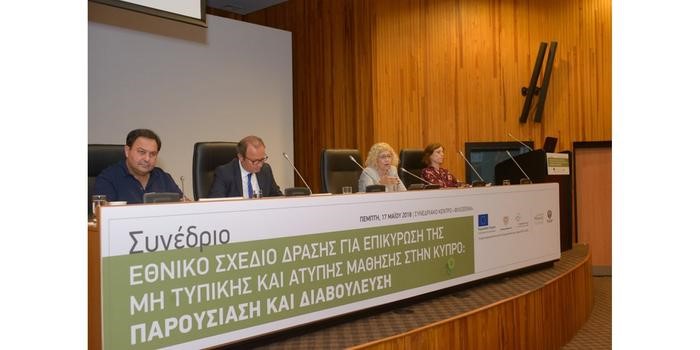 Representatives of Ministries, Social Partners, NGOs, Higher Education Institutions as well as interested citizens attended the Conference and was given the opportunity for a productive discussion with all participants, who submitted their views to be used to finalize the National Action Plan.
The Project responds to the EU Council Recommendation of 20 December 2012, adopted during the Cypriot Presidency, whereby EU Member States were invited by 2018 to adopt mechanisms to validate non-formal and informal learning.
During the Conference Dr. Angelos Koutsomichalis analyzed in depth the proposed National Action Plan for non-formal and informal learning. Furthermore, the concept of the project, the strategic plan and the target group were elaborated. His presentation also included a thorough analysis of the validation process, activities of the National Action Plan and the funding resources of the validation mechanism.
The National Action Plan, when it takes its final form, will be promoted to the Cabinet for approval.