EEO Group S.A organized the Transnational meeting about JU.M.P Program, which was held in its Headquarter in Athens on 19-20 October 201

This meeting was organized in the framework of the ‘’JU.M.P-Juggling Motherhood and profession’’ an Erasmus+ program, under the KA2 Call ‘’Cooperation for Innovation and the exchange of good practice’’.

The participants in this meeting were: 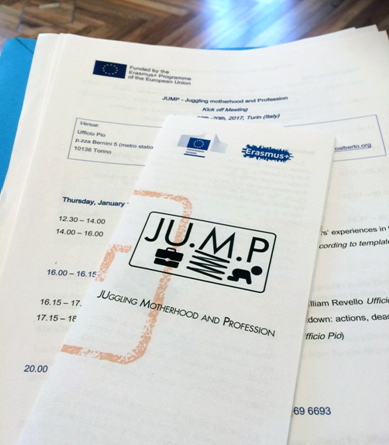 The Kick off Meeting started at 19-20 January 2017 in Italy and the partners had the opportunity to discuss about the objectives of the project. Partners discussed on the final division of work, the overall project management structure, the financial/administrative framework, the dissemination strategy and the monitoring plan.

Information on the JUMP Project

The project “Jump: Juggling Motherhood and Profession” is an EU funded project under Erasmus+ KA2 - Strategic Partnerships for adults. JUMP has been developed to respond to unskilled mothers’ request of help to find a job, social professionals working in public and private establishments need to set up complex and multilayered methods of social intervention: in first place they need to be able to rely on innovative practices capable to address the social/emotional/relational roots of the unskilled mothers’ unemployment or inactivity challenges.

The partnership focuses on Southern Europe (I, ES, GR) and one South-Eastern European country (HR) and has an impressive curricula of working with women employability, training and assistance.